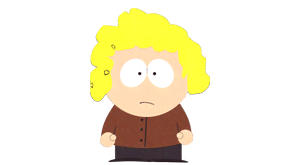 Annie is the quiet, curly-haired blonde girl who's always in the back of the classroom - she hangs out with the other girls and boys a lot, but doesn't talk much. She can be a bit naive, being one of the only girls not to know what a queef is. She seems to have an interest in boys, as she was part of Bebe Stevens' clique during the Stupid Spoiled Whore fad and was an early member of Butters Stotch's kissing company- and as part of the cheerleading squad, photo-shopped herself to gain popularity, giving herself a 'slim jim' waist. She is sometimes bullied by the older girls and has a Justin Bieber doll.