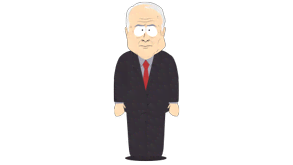 A longtime Senator from Arizona and Vietnam war veteran, McCain's long political career has all been a cover-up for his criminal activity as part of a ring of elite thieves, alongside Barack Obama and David Quincy. He and Obama orchestrated every move of the 2008 election to get Obama in the White House so they could pull off the ultimate theft - the long-believed 'un-gettable' Hope Diamond. He was presumed dead in the same explosion that killed Sarah Palin and David Quincy on Election Day 2008, distracting from their successful operation, but McCain escaped alive under an unknown alias in the Caribbean.

Series co-creator Matt Stone provided the voice of McCain in "About Last Night", opposite Trey Parker as Obama.

They considered bringing back their version of McCain for "Obama Wins!" but worried about the episode becoming too similar to its predecessor.

In real life, McCain continued his service in the United States Senate for nearly ten further years, until his death in August 2018 from brain cancer.