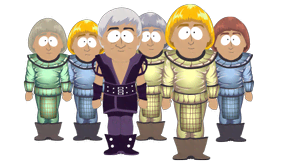 In an alternate timeline where Richard Dawkins marries Janet Garrison, the Allied Atheist Alliance, the United Atheist Alliance and the Unified Atheist League have been at war over the answer to the Great Question plagued by the great and powerful Dawkins, each seeking to prove the superiority of their choice of name. They worship science as part of their atheism. When the timeline is repaired by The Time Child, they become parts of a unified/allied atheist alliance/league in the future instead.

Members of both human atheist leagues/alliances are seen trying to defend themselves and their city against Scott Tenorman's tyranny and his dangerous Gingerbots, though neither league does much besides provide minor obstacles and help to the heroes.