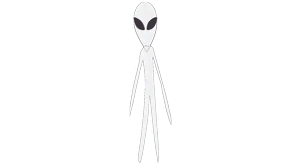 These alien Visitors abduct people and mutilate cows. (That was Carl's bad. Sorry.) Every night, they take various South Park citizens aboard their ship and probe their anuses thoroughly, most notably Eric Cartman and Randy Marsh. Some Visitors perform other functions, like helping scout for nominees for Biggest Douche in the Universe, or working on universally broadcast reality programs. It has also recently been found that their ships contain a goo that, when in contact with organic material, create danerous Nazi Zombies.

Hidden visitors can be found in the majority of South Park episodes in the first several years of the show. Eric Stough used to try to hide them in each episode at the last minute. They have appeared much more sporadically in recent years. Contrary to popular belief, they are not hidden in every episode.